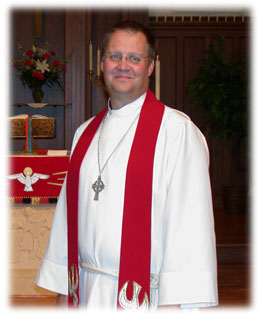 Reverend Robert Steele was born in Fort Knox, Kentucky on March 29, 1961. He was baptized on that day as well. His family moved to Michigan where they attended Peace Lutheran Church and School in Warren. He and his two brothers and sister were all confirmed there. He attended Lutheran High School North in Mt. Clemens, Michigan, where he met his wife, Julie. They both graduated in June, 1979. Pastor attended Oakland University where he received his Bachelor’s Degree in Management Information Systems. He and Julie were married on May 1st, 1982 at her home congregation, St. John’s Lutheran Church, Fraser, Michigan.

They lived in Mt. Clemens, Michigan when their first son, Daniel, was born prematurely on June 16, 1987. They were blessed with Rachel on April 6, 1988. In the spring of 1989, they moved to Whitehall, Michigan. They were blessed with twins, Nathan and Sarah, on June 16, 1990. In the spring of 1993, the family moved to Ft. Wayne, Indiana where Pastor entered the seminary. He graduated with his Master’s Degree of Divinity in the spring of 1997, and received his first call to Our Savior’s Lutheran Church in Sheboygan, Wisconsin as their associate pastor. In the summer of 2006, he was called to Bethany Lutheran Church in Kohler, Wisconsin where he is currently the Pastor.